From my travel diary.

Greetings from Belgrade! We caught a taxi from the station to this absolutely palatial hotel where we’re waited on hand and foot, with red carpets, room service, chandeliers, beautiful blue and white damask table cloths and serviettes – the whole bit! Its name is the Hotel Jugoslavija.

But what of the train and the city? Well, the Hellas Express dropped off carriages and picked up carriages throughout Serbia, so the train was eventually very long indeed, and very high up off the ground when you were trying to get your luggage down. The third class sections filled up with many young men dressed in green khaki uniforms all leaning out the windows, so that by the time we got to Belgrade, the train looked like something out of ‘Bridge over the River Kwai.’ The station was covered, and long enough to match the train. There were a number of very tall men standing around, not thin, as tall blokes often are at home, but well-proportioned without being overweight. A lot of taxi drivers standing on the platform asked Lyn if she wanted a lift – notice, no one asked me. Maybe they thought I was a local - so we finally chose one, and off we went.

Although Belgrade looks a bit grotty near the station, it is, later on, a nicely laid-out city with wide streets, a big river crossed by many fine bridges, and green lawns; shrubs and trees everywhere. This morning, we went for a walk into town – about three kilometres – along the Sava River and over one of its many bridges. There was a large space of grass and woodland down from the hotel – apart from the gardens along the bank – and on this was staged a military display to mark the 40th Independence Day. It was a huge turnout. I haven’t seen crowds like it since Queen Elizabeth came to Australia in 1970 and we went to see the fireworks. To make matters worse, many of them are very tall and well-built, so for once in my life, I couldn’t see over the crowds. There were jet displays with stunt flying – really noisy – red, white and blur tail flares, missile exhibits. On the river, speed boat tactics, tanks on barges and pontoons. The land content was a series of deafening explosions, soldiers climbing up trees, radio controlled planes, tents and other equipment. All this was accompanied by brass and military band music and a male chorus that sounded for all the world like the Red Army Choir. There was dancing in National Dress, too, so I took some photos.

The city is cleaner than Athens and the buildings are nicer to look at, but to us it was still fairly drab. The older buildings have an interesting architecture and would look attractive with a bit of care.

Our tour started at 6pm with drinks and a speech by the guide, Saša, and a four course dinner.

1. Cheese and cured meat with bread.

I’m trying to eat half of everything so I don’t waddle off the bus when the tour ends. There are many Americans touring with us who can be, in some cases, overbearing. They think money can buy the world and the earth is America’s oyster. Joan and John Taylor are a nice couple from Bendigo who we have teamed up with. As with us, he works in a hospital.

Today is Sunday and I haven’t been to church for three weeks, which I regret. We sat down to breakfast at five to eight and I thought of the service starting at home, and whether Brian or Graeme would be playing the organ. Ah well! I am here and not there, so what’s on the agenda for today? A two and a half hour tour of Belgrade showing the old and new parts of the city. Note that it was extensively bombed during the war, and a lot of older buildings were destroyed. “Belgrade” means “white city”, a name given to it because of the white stone it was made of. Yugoslavia has had a long and checkered history. It was first settled by the Celts in the third century BC and then taken over by the Romans in the second or third century AD. From then there have been Slavs, Turks, Austrians, Germans, Hungarians and the modern people fighting for domination. The history is long and complicated and needs a detailed study to understand it correctly.

There are six states according to the tour guide: Serbia, Croatia, Slovenia, Bosnia, Macedonia and Montenegro. Belgrade is the capital and there are three religions: Orthodox, Catholic and Muslim. Belgrade is dominated in the new section by large areas of parkland, un-kept, usually, dotted by huge housing complexes (as in Redfern) and sky scraping offices rising out of the greenery. Near the hotel, two rivers converge, the Danube and the Sava. The parkland was once swamp which has been filled in by sand and built on since 1948. It’s funny that there are sometimes really flashy modern buildings for international conferences, but the gardens around them are entirely un-kept. Obviously a case of priorities!

There are many large public buildings in the older section and some beautiful churches creating interest in the otherwise grey, straight streets. The shops do sell modern clothes, shoes and so on, but are not made to look bright and attractive like they are in Sydney or London.

The next stop was an interesting, if exhausting, hike to the tomb of President Tito. This is a very sacred place for the Yugoslavs and they come in large numbers to pay homage, often bowing before the simple white marble rectangular tomb. There is a guard of four soldiers there 24 hours a day, and the whole tomb, as we walked around it, was surrounded by beautifully coloured, cultivated flowers. The effect is very nice and certainly reverent. Tito obviously meant a lot to them. The hike, by the way, is because the tomb is at the top of a hill in a densely wooded park. Since the weather is so humid and the older members of our party so slow, I was pretty wacked going up and down. 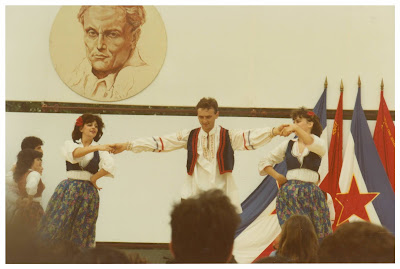 Joan said, from experience, that if I don’t forget the Americans and their silly talk, and try not to notice them, I will go bananas. I think she is quite right. Even the middle aged ones. If they don’t control their brash rudeness and be more sensitive to those around them whilst travelling overseas, they will make a very bad name for the United States wherever they go.

This evening we went to a lively and traditional area of the city where crowds of people go to eat - inside and outside tables – traditional food and dishes borrowed from other countries. Our restaurant was one of those beautiful oak-panelled rooms with frosted and patterned glass doors and soft romantic lights. Very like something from the Orient Express. The band moved around the room, playing as they went to various sections of our party, some of whom decided to dance. As they played, they often sung in rich voices and beautiful harmonies. There was an excellent violinist, a guitarist, a dark ukulele, a double bass and a piano accordion. All men. All the bands, inside and out along the cobbled streets were un-amplified. Needless to say, the atmosphere inside our restaurant, with the band and superb male singing was as near to heaven as I could imagine. They sung fast, they sung slowly, loud and soft, mournful and exciting. So wound up was I in thoughts and the spirit of the night that, when the party rose to leave, I got such a surprise that I almost didn’t follow them.

3. Vela stew and red and yellow capsicum with rice.

4. Apples stuffed with nuts, with meringue and cream.

Posted by His Most Italian City at 9:49 PM No comments: