This article first appeared in TOTAL SLOVENIA NEWS on 4 August 2020. 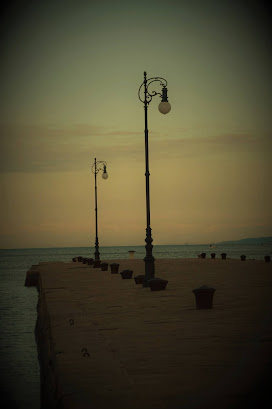 By what convoluted route did an Australian come to write an historical novel about Slovenian Trieste? It’s a long story.

Asking my birth mother Silvana (1920-2020) for her family history was like getting blood out of a stone and, when at last she began to reminisce about her earliest days in Istria at the age of 90, it was a race against time to record it. Nevertheless, I discovered that her father came from Trieste and her maternal grandmother, Marija Matiasić, had run away from a village in Slovenia aged 16 sometime in the 1870’s. I began to write His Most Italian City so that these memoirs might not be lost, in the process uncovering the history of Slovenian Trieste that ran parallel to it.

In common with Sydney, where I come from, ports are multicultural places and in my novel I have drawn Trieste this way. It is a city perched at the crossroads of Slav, Latin and Germanic peoples and, before World War One, served as the port of Vienna. Half its population spoke a dialect of Venetian, like my mother, and the Slovenes, who made up one quarter, were the largest ethnic minority. When I wrote on page 117 of the novel that ‘half his friends came from mixed marriages,’ you can easily see this ethnic diversity in the nineteenth century marriage records of Trieste.

‘Repressed by Austria no more! Viva l’Italia!’- page 65. Austrian tolerance of multiculturalism was a threat to an Italy only recently united, and deeply resented by its intellectuals and politicians who had been the driving forces of the Risorgimento. Declaring themselves the inheritors of ancient Rome, they envisaged an Italian Empire, and developed a movement involving land claims where Italian ethnic or language groups lived, called ‘irredentism’. Its definition varied from reasonable to extreme. For example, in the novel my Istrian grandmother Dolores is half Slovenian and half Croatian, speaks Venetian but considers herself Italian. If a town contained enough people like her (or even if it didn’t) an irredentist might claim that the town was Italian. For the Slovenes in Trieste the movement signified that irredentists considered Austrian Trieste to be ‘unredeemed Italy’.

Piazza Oberdan by Boris Pahor begins by chronicling the growth of the irredentist movement in Trieste and its effects on the Slovenian population. The book is the collected memoirs and stories of a particular place at a particular time by an author who was frequently an eye witness. It is essential reading for anyone who is interested in Slovenian Trieste. Unfortunately, I could only find it in German and Slovenian. (Translators, please note: when can we expect an English edition?)

‘The Irredentist movement became particularly significant in Trieste after 1870’ with the Italian occupation of Rome and the Vatican. ‘The Irredentists so strongly influenced public opinion that gradually the citizens began to give way to it… This was not in harmony with the Slovene population….The irredentists, therefore, turned their attention to the Slovene middle class and often provoked clashes between Trieste citizens of Slovenian descent and Italian agitators.

‘Apart from the fact that they wanted to shake off German dominance, the Italian nationalists had an additional motive for connecting the city to Italy: resistance to the economic and cultural growth of the Slovenian people. Although this population had been an integral part of the city for twelve centuries, it consisted of peasants in the suburbs, but in the city itself it consisted of carters, waterside workers, cooks, nurses, masons, labourers, and small merchants…In 1848, as in Vienna, so in Trieste, people demanded the recognition of their Slovenian identity, and so gradually began to form a Slovenian middle class.

[The construction of the Narodni Dom in 1904] ‘was a great provocation to the anti-Slovenian Italian agitators, accustomed to seeing the Slovene community composed of small karst farmers, dairy maids, housewives and labourers. When, after the end of the war, Rome seized control of the city and its surroundings, the Narodni Dom became one of the main targets of the hate that had hitherto been suppressed.’

‘On that afternoon of July 13, 1920, the sky had turned blood red before sunset, and at the same time we learned of the fire… we ran downhill in the direction of those dull voices that came up from the piazza. We were actually witnesses of the events when we stopped at the corner in front of the coffee house Fabris. Everything in front of us was as if it were on a stage: that screaming crowd, over which the flames were zipping out of the windows of the Narodni Dom. We were shocked, held each other's hands, and stared at the firefighters. The attackers refused to allow them to direct their streams of water at the burning building… I probably wondered, as was the case later, why this fire, what was this crowd, this assault on the fire hoses, so that the water did not shoot up but poured itself on the ground? I learned later that people from within the Narodni Dom had doused it with petrol from the barracks, and that two people had jumped out of a hotel room onto the street.’

In what has been termed ‘Trieste’s Kristallnacht’, a great deal of other Slovenian property in the city was also attacked.

Pahor continues, ‘As the editor of the newspaper Il Piccolo, Rino Alessi, put it in his article “Trieste has placed itself at the head of fascism.”’ He goes on to detail the violence towards the Slovenian community in Trieste and in the Slovenian territory given to Italy after World War One.

In order to record a balanced judgement, it’s important to put this historical period into context. Fuelled by misinterpreted Darwinism, racism was in vogue not only in Germany and Italy, but even in Britain. This meant that, in response to Italian demands at the secret Treaty of London, which in 1915 brought Italy into the war, Britain had few qualms about incorporating one third of small Slavic Slovenia into an enormous Italy already on the brink of Fascism. After the war, the single voice for the national self-determination of the Slavs was Woodrow Wilson of the US who addressed this issue in his Fourteen Point Plan. Unfortunately his suggestions were ignored and Mussolini, who was shortly to take up office, was a vocal anti-Slav racist. What followed were the ravages of Fascism as it stretched its tentacles far and wide.

The best referenced article I have read about this time was written by Gianfranco Cresciani. ‘A clash of civilizations? The Slovene and Italian minorities and the problem of Trieste.’ Italian Historical Society, Australia. Volume 12, No. 2 July-December 2004.

Dr Cresciani writes: within Trieste and Istria the Fascist regime ‘progressively shut down most Slovene or Croat institutions. Between 1918 and 1928, 488 primary schools were closed, as well as some 400 cultural, sporting, youth, social and professional organizations and libraries, three political parties, 31 newspapers and journals, and 300 co-operatives and financial institutions.’

One day when Silvana was 97, we were out for a walk when suddenly she said, ‘My father was very unhappy. The government wanted to move him all over Italy.’ This was Romano Tonon (1886 -1956), born in Trieste of an Italian mother and a Venetian father, but apparently limited in his career choices because he was educated in Graz rather than Italy. On page 138 of the novel, my great uncle (1896 – 1984), who was Slovenian and Croatian and also educated in Austria, was denied promotion at the University of Florence. Silvana deplored the discrimination he suffered. She mentioned it on many occasions. I have a photograph of Zio Lin, as she called him, still lecturing about a mosquito that attacked olives at retirement age. In 1928 his family’s name was Italianised. The original Italian in the birth register reads: ‘Il controscritto cognome di Micatovich è stato corretto a quello di Di Micheli con decreto del Prefetto di Pola.’ ‘The countersigned surname Micatovich has been corrected to that of Di Micheli with the decree of the Prefect of Pola’ – page 18 of the novel. In the same register a further round of Italianizing Slavic names occurred in 1933.

I believe that any article about Slovenian Trieste needs a reference to Britain. There are several of these in the novel. ‘Britain, in particular, will back Italy as harmless if it serves British interests’ – page 24. ‘Istria was given to Italy after the war by the winners because the Italians asked for it, and to reward it for fighting on their side’ - page 174.

In 1923 King George V ‘conferred upon Mussolini the insignia of the Order of the Bath and congratulated the country for emerging from its recent crisis “under the wise leadership of a strong man of government”’.  (Fascist Voices by Christopher Duggan, Vintage 2012.) And according to my father-in-law, who was an Australian soldier in Italy between 1942 and 1945, it was fear of the communism of the Italian Partisans (not Yugoslav) that led Britain to approve of General Badoglio as Prime Minister following Mussolini because, despite his Fascist war crimes, he was anti-communist. Douglas Walker received the Certificato al Patriota for his work with the Italian Partisans but he continually stressed the importance to the Allies of stabilizing Italy.

Lastly, Trieste Goes to Australia by Gianfranco Cresciani (Padana Press, 2011) documents the fate of so many Slovenians in Trieste when the city was returned to Italy in 1954 after nearly a decade of being a free port under Allied occupation. Particularly poignant are the photographs of the Audace Pier crowded with thousands of forced emigrants, ten percent of Trieste’s population. After their departure, depression fell upon the city.

Today is a time for understanding and healing between two nations. Italy has thirty times the population of Slovenia, and at least that number again living around the world claim Italian heritage. We are far enough removed from Mussolini for these Italians who may not know of his excesses to study them objectively. So my last words will come from an Italian:  To be ignorant of what occurred before you were born is to remain forever a child – Cicero.

Posted by War in the Balkans at 5:00 PM No comments: