THE ADOPTED PERSON'S GUIDE TO ISTRIA 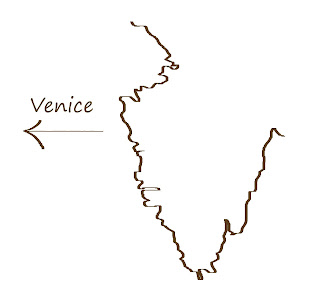 I had no interest in modern Italy nor the Italian diaspora that has produced restaurants in almost every city on earth. My adoptive mother and father were proud colonial Australians. They didn't go to restaurants. They went to the cricket. They caught fish, and their parents referred to Yugoslavs as Balts even though Yugoslavia was nowhere near the Baltic.

Discovering herself overnight the parent of a very large baby, my mother accordingly brought me up on a mixture of Australian oral history and stories of the female Yugoslav Partisans. I thought they were thrilling, and I just knew that my birth mother had hurled grenades at fascists. Yugoslavia seemed a wonderful place to me and, when I spent two weeks there in 1985, I settled as naturally into its lakes and forests as if I had taken root.

So, when I met my brother in 2002 and his first words were ‘my mother is Italian,’ I was less than impressed. (I recall that my half-Italian husband and I may have differed on this.) My sister’s children also told me, ‘Nonna is Italian.' They retrieved a stack of postcards from a dusty shelf addressed to Silvana Di Micheli Tonon.
​
‘Di Micheli is her mother’s name,’ they said.

Well, I had met my biological mother in 1989 and I knew better.
​​​
'Silvana told me that her mother's name was Micatovich.'

I produced my adoption papers and tapped 'Yugoslavian' prominently.
​​​
‘Italian,’ they replied.
‘Yugoslavian,’ I said.
​
​    Welcome to Istria.
​
Silvana was born in Tar, an Istrian hilltop village, in 1920. She took her holidays in nearby Novigrad. Trieste was her city. Following the war, having been Italian for a brief 25 years and Austrian before that, Tar became part of Yugoslavia. In its park, on the cenotaph beneath the partisan star, is an inscription in Croatian and Italian written in 1952, 'This stone is erected as a sign of gratitude to the Croatian and Italian fighters of this community. Casualties for the liberation of our people.'
But Silvana never went back. She was Australian from the minute she stepped off the ship in 1950 and her family, growing up without oral history, were left to their own devices in deciding where she came from. Then one day, when she was nearly 90, she began to reminisce about her childhood. My sister, scribbling furtively, recorded as much as she could, and this is how I discovered that, when her parents took on Italian identity after the war, Silvana herself decided to become Yugoslavian.
​
What she ultimately related did not amount to a book, but it was enough to bring the past to life and to create the story world for the novel. When she and I read a book together that my brother had bought her about Novigrad, called ‘Cittanova D’Istria,’ it encouraged further memories.
​
‘Mandracchio?? ' she exclaimed, thumping the page. (She was 97.) 'Ha, ha, ha! Mandracio, please, not mandracchio. And see those Venetian walls!’ More thumping. ‘They’re to keep the Turks out. People in Cittanova would say to one another, "I’m not a Turk!"’

And finally a few quotes to shed light on that troubling Yugoslav/Italian question:
​​​
‘I like Italian culture but I don’t like Italians. Italians are distrustful because they have been invaded too many times.'
​'My father was very unhappy. The government wanted to move him all over Italy.'
​   ‘I saw Mussolini with Hitler in a car in Florence. I was surprised how small he was.'
​​   ‘I felt displaced in Italy.’
‘Micatovich was an important name in our village. It was the name of an island down the far south coast near Albania.'
​   ‘My grandmother came from a village near the Austrian border.'
'We were Austrian, then Austria lost the war. Then we were Italian, and Italy lost the war!'
​
My own feeling is that Silvana thought of herself in regional terms, not national. She was Istrian and the mixture of cultures that that implies. ​I fancy that nationality is a modern invention.

Posted by War in the Balkans at 2:02 PM No comments: