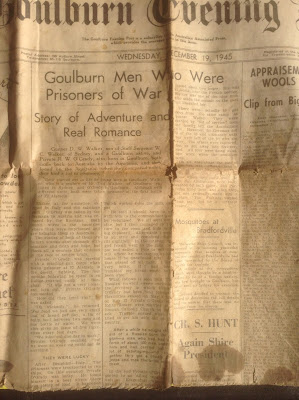 Story of Adventure and
Real Romance

Gunner DW Walker, son of Staff Sergeant WC Walker of Sydney, and a Goulburn native, and Private RW O’Grady, also born in Goulburn, both came back to Australia by the Aquitania, and they found on the Aquitania, when they compared notes, they had a lot in common. Both started out life by being born in Goulburn. Walker, who is a nephew of Mr Ted Walker, of Goulburn, enlisted in Sydney, and O’Grady in Goulburn. Although in different units, both were taken prisoner at the First Battle of El Alamein.

Walker, at the armistice, escaped in Italy and did sabotage work. O’Grady was taken by the Germans to Austria and released by the Russians. Both found wives in the countries where they were imprisoned and are bringing them to Australia. The stories of both of them are human stories shot through with romance, faith and hope but, above all, a courage that endured in the face of severe trials.

Private O’Grady was serving with a machine gun corps when taken prisoner at El Alamein in the desert fighting. The four months following he spent in an Italian guarded camp at Benghazi.

“It was not a very pleasant turn-out,” Private O’Grady commented.

“How did they treat you?” he was asked.

“Oh, wickedly,” he returned. “For food we had one very small loaf of bread per day, a tin of bully beef between two men and a bottle of water. We were also given and issue of five cigarettes every few days.

“We went out one day to work,” Private O’Grady recalled, “but we were so weak we could not do anything.”

THEY WERE LUCKY
After Benghazi – Italy. The prisoners were transported in two ships. On this occasion Private O’Grady was lucky. He found himself in a boat where there was plenty of food. It happened to be a cargo vessel laden with food for Libya but there had not been time to unload her.

“Every prisoner on board was sick because,” Private O’Grady explained, not having a square meal for so long a time, he ate to overcapacity.”

Apart from this, conditions on the ship were very bad. There were 500 men in the fore hold and 500 men in the stern, and none was allowed on deck except for a few minutes.

RED CROSS
From Taranto, where the ship put in, the prisoners were taken to a prison camp at Brindisi. There again, the food was very poor except what came through the Red Cross. Things remained like that until Italy capitulated in 1943. Then the Germans took over and Private O’Grady was sent into Austria – to a place called Spital. From there he was drafted to work in a magnesite factory at Treben but after a while he was shifted to another prison camp at Wolsburg and from there to Mureck.
Conditions here were “fifty-fifty” as Private O’Grady put it.

“If you had a last wartime guard over you,” he said, “you had a fair time of it, but if you had a young fanatical guard it was not so good.”

BEGINNING OF ROMANCE
It is at this point of the story that the first hint of romance emerges.

“One day,” Private O’Grady recounted, “I went into a milk depot to weigh myself. I wanted to see how I was going for weight. And there it was that I met my future wife, Edith Romer of Budapest. She was finishing off her schooling in Austria when the war broke out and the Germans sent her to work in the milk depot. We saw a lot of each other and things began to progress. Just at that time Red Cross parcels were not coming along because railway transport had been knocked out by bombing, and my girlfriend helped me with food.”

On April 1st of this year the Russians were making rapid headway on that front and the Germans gave orders for all prisoners to be evacuated.

“But I didn’t want to go,” said Private O’Grady. “I wanted to be liberated by the Russians. So at ten o’clock one morning I got out of the window of the laager and hid in a barn until nightfall. Then I went to the house where my girlfriend was all alone – her aunt had gone away – and there I stayed for five weeks.

“In the meantime between 15 and 20 SS officers were put up in the house. They were always wanting to peep into the room where I was hiding. But my friends put them off with excuses.

“A colonel of the partisan army was keeping me company just then and, one afternoon when he and I were listening to the wireless and my girlfriend was digging in the garden, the door of our room was opened and in walked an SS officer. He examined the Colonel’s papers, but I had none to show. My girlfriend came in and told him I was a Polish worker from the milk factory.

“He said I should have to go with him to the commandant and be recognized. We all went outside but I then managed to return to the room and hide in a big cupboard. Afterwards I went to an attic and remained there until nightfall. In the interval my girlfriend went to the milk depot and asked a Pole to tell the SS officer he was staying at her house if he questioned him. I was very lucky. If I had been ‘rumbled’, my friend would have been shot.”

What follows is soon told. The Russian forward sweep encircled the territory in which Private O’Grady had been held prisoner. Hostilities ceased on May 8th and on May 13th Private O’Grady and Edith Romer were married at the Roman Catholic church in Mureck. Trouble ensued when he tried to get his wife out of the country.

After a while he sought the aid of a Russian born Belgian - man who had a force of about 100 men under him and had carried out a lot of sabotaging – and together they got a couple of Jeeps and took the bride with them.

In the end Private O’Grady reported to an Allied Repatriation Unit at Klagenfort where he asked if he could take his wife on the [unreadable print] …..…informed that his marriage was illegal because he had not first obtained permission. However, he and his wife got to Naples where they were remarried.

In October they got permission from the War Office to go to England.

GNR DW WALKER
Gunner Walker was serving in an anti-tank battery when taken prisoner at El Alamein in July 1942. He was sent from there to Benghazi, then to Tripoli and next to Northern Italy. For a time he worked in a camp at Piedmont.

On September 8th 1943, when Italy capitulated, he was liberated and a month later he joined the partisans. He remained with them until November of last year. Then a British mission landed by parachute in the area and he worked with it until the end of the fighting.

“I met my wife (Marina Savini is her maiden name) while I was with the Partisans in Northern Italy,” Gunner Walker said. “That was in September of last year. We were attacking one day and our party was split up. At the beginning I was able to see her pretty freely, but then the Fascist activity became very strong.

“While I was with the British Mission my wife-to-be kept myself and other members of the mission in her home for some time. Unfortunately somebody split on us and she was kept in prison for two and a half months but later was liberated by the partisans.”

Gunner Walker and Marina Savini were married at Biella in Northern Italy on May 26th last. They landed in England on October 1st at Eastbourne.

THEY LEFT
Asked how it came about that he was liberated and why the Germans did not get him across the Alps into Germany, Gunner Walker said they had heard that the Italians had thrown in the towel and the Italian guards were not very particular at the time. It was in September 1943 that he was freed. Actually he walked out of the camp and took the risk. He joined with the Partisans and found them operating in the territory near the Swiss border. He fought with them more or less as a sabotage man and in general actions until the British Mission arrived in 1944.

Before that British parachutists had joined up with them and he was regarded as the sabotage expert of the group. He had plenty of excitement, and it was when making one of the attacks that he met the girl who was to be his future wife.

The charge against her was one of espionage and “being engaged to an ex-prisoner of war”. There was price on the heads of all Australians who had escaped. She was 17 and had been at college until she linked up with the Partisans. She was valuable, as she could speak French and English as well as her own Italian. She was working with the Partisans until the end of the war. Her arrest for espionage came about a fortnight before the armistice. The fight at the gaol lasted about two hours; this was at Aosta near the French border. Walker was one of the nine men who made the assault on the goal and liberated her.

There were actually 80 got away from the same camp as Gunner Walker. They were guarded by “out of service” men and mostly left the Australians to it. However, the Germans got 30 of the 80 and ultimately only four were left of the 80 who got away. The others were captured, shot or got away into Switzerland. All four were doing sabotage work when the armistice came.

In fact, the Australians were badly wanted by both sides. The Partisans liked them and, when they got one, generally made him a captain. The Fascists wanted them too but for a different reason.

This article refers to my father-in-law, Doug Walker.

Below is his award from the Italian government, signed by Field Marshal Alexander. 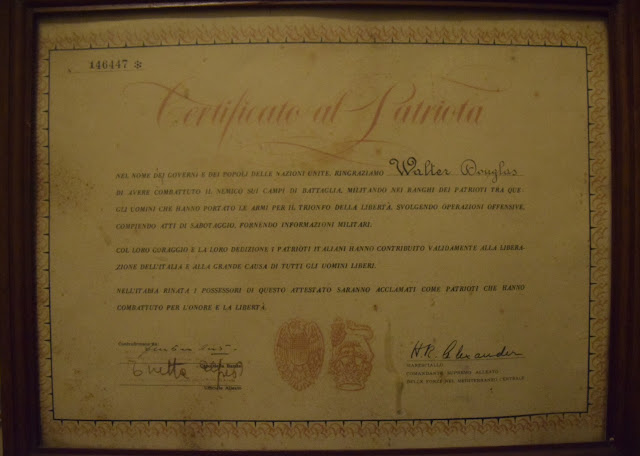 Posted by War in the Balkans at 3:34 PM No comments: