TERROR ON THE HIGH SEAS - A Tour of HMAS Ovens 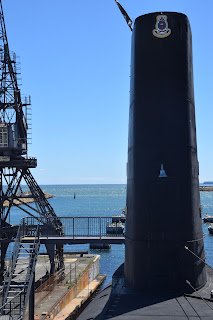 Just before I departed Sydney for the 2016 World Masters Athletics in Perth, my neighbour presented me with a handful of pamphlets and insisted that I go on a tour of HMAS Ovens, an Oberon-class submarine of the Royal Australian Navy launched in 1967 and now retired to the Western Australian Maritime Museum.

Once down at the track, I discovered myself next in line for the 100m finals, should there be a withdrawal, but the lure of a boat trip was too strong and I pulled out, deciding correctly, as it transpired, that few competitors were likely to be injured this early in the Championships. So, beneath the stunning blue skies of Western Australia, I hopped on the cruiser at Perth and sailed down the Swan River to Freemantle banked by a dry eucalypt forest and the mansions of the rich and famous.

Knowing my predisposition to claustrophobia, once I disembarked I succumbed to mild panic and did not buy a ticket but decided to have lunch instead, in the hope that it might strengthen my resolve not to be a coward. I explained myself as best I could to the man at the ticket office and fled.

Much more relaxed under the calming influence of food, I realized what an idiot I had been and returned to the museum, purchased the ticket for the 1.30 tour, put my gear in the locker and lined up with seven other tourists.

HMAS Ovens is in dry dock and must be accessed by a ladder. It loomed above us, as black and daunting as a haunted house on Halloween. Suddenly, the woman in front of me said, ‘I can’t do this,’ and left abruptly. As I watched her depart, wondering whether I should, too, I realized that I had neglected to comfort her by acknowledging that I had contemplated the same thing just before lunch. She should have had something to eat. It might have made her feel better.

Forget Das Boot. In HMAS Ovens, one enters down a forward hatch, not the conning tower, which is enclosed in a modern ‘sail’, that large black turret that sticks up in the middle. I proceeded in trepidation towards it and was informed that, because I was wearing a skirt, I had to go down first. I descended the ladder and discovered myself in a room of torpedoes. Plenty of head space, and everyone else soon joined me at the bottom. So far, so good.

Just to clarify what I was frightened of, let’s have a look at what a submarine actually is: a long, narrow – very narrow – tube in which men are entombed, or so it seemed to me. At 90m long Ovens is only 8m wide, and this is the outside width, not the space the submariners actually have to spin around in.

Let me make it clear that claustrophobia is entirely personal. I did not find safety in our small tour group but in endless space above. I had some advantage in Freemantle because I had had time to gather my feelings together but, if one is shut in without warning, one experiences immediate panic to leave. This happened to me in 2017 whilst driving through the Lane Cove Tunnel in Sydney, even though I had been through it before and have many times since without problems. The tunnel is 3.6km long and this particularly anxious day, I felt something descend upon me as I entered. I knew that I had to stop the car and leave - now. As this was not possible, I turned the radio off, stared at the road ahead of me like there was no tomorrow, and said the rosary. Fear was the only way to describe what I felt and, as soon as the tunnel ended, it went away but I remained shaken up for the rest of that day.

So, here I was in HMAS Ovens, in a tunnel and, despite being a veteran of numerous submarine movies and several books, nothing prepared me for the intense claustrophobia of actually being in one. Once we left the torpedo room, I spent much of the tour of the sleeping quarters, the next area and the tightest squeeze, fiddling with my camera to distract my nerves. I advise anyone in a similar situation to look down and not up, because that way you don’t realize you’re being slammed in by a ceiling. I am 177cm tall yet I could stand on my toes and touch it with my head. In this space were bunks for three men squashed together like a coffin sandwich. There was no way I was going to scream and walk out in front of a crowd – even I have some pride - and as Philip the retired electrician continued his fascinating talk, I adjusted my aperture and exposure settings, hoping to fool everyone into believing that I was doing so because I was a professional photographer.

Although the captain’s cabin and the officers’ ward room seemed to me like children’s cubby houses, the galley was the real shock. One and half metres by two metres? About half the size of our bathroom. I have imagined since the unfortunate cook struggling to feed the Ovens’ compliment of 68 men in this tiny space until a submariner recently informed me that there two cooks, not one. And I thought our kitchen was small! Submarines during World Wars One and Two were infamous for being as hot and humid as saunas, with condensation forming on every available surface. It has been said that there is no comparison, in modern terms, with the conditions the early submariners were expected to endure, with the possible exception of higher wages. But, as I regarded that tiny cooking space, I did have the fond hope that by the 1960’s submarines might have been air conditioned.

The control room was easier to cope with, then we walked through the engine room and back to a further space aft with more torpedoes. Naturally, I and my skirt were the last ones to leave.

So vivid afterwards was the fear of being shut in that, when I visited HMAS Onslow, the identical submarine at the Australian Maritime Museum in Sydney, I had to pause and tell myself, yes I can do this. 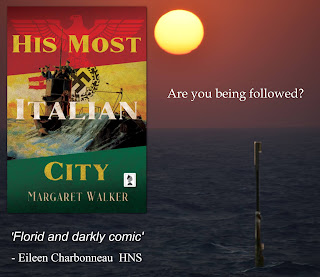 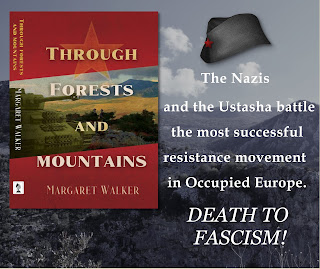 Through Forests and Mountains - Kindle edition by Walker, Margaret. Literature & Fiction Kindle eBooks @ Amazon.com.
Posted by His Most Italian City at 11:04 PM