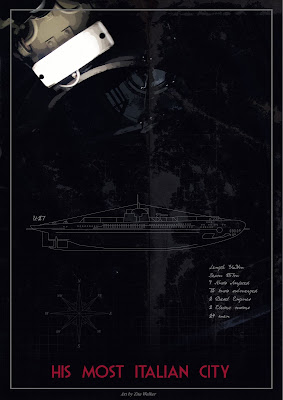 'But worse, far worse than the stink, the machinery and his deteriorating self-perception was the need to leave this enclosure immediately: to escape the lowering ceiling and forge his way up to the sky. With the claustrophobia arose the conviction that there were not two people squashed into this iron cupboard but three. The third, an intangible menace, had arisen as he’d sloughed off his unconsciousness. Down the brief passage it had accompanied him, through the bulkhead and into the control room, and now it settled above his head, threatening and malevolent. By devious means it attacked his heart which began to thud wildly within his chest. Then it strangled his breathing. The weak tungsten globe fading in the clutch of its wire cage seemed like the last sliver of twilight and, as night closed in, the presence focused itself upon him. He felt as if he were travelling along a tunnel searching for daylight, with this awful phantom clinging to his back, and, at each moment, he anticipated the approach of the sunshine that would subdue it. But he saw no end to the tunnel. And no sun. And so the fear and the panic proliferated. It was distressing to think that he, a product of a comfortable home and a good education, had been reduced so rapidly to this desperation. The presence hovered just beyond his recognition so that he was unable to name it, but when he closed his eyes he saw its face melting like ice in a flame.'
Art: Zita Walker
Posted by His Most Italian City at 10:26 PM