When war threatened in 1914 submarines had come a long way from the H L Hunley, the first submarine to sink a warship way back in the American Civil War, but to understand them today requires the same knowledge of basic physics that it did then. Too often, if the forces acting upon a submarine became unbalanced, whether on the surface or below it, the boat could suddenly disappear and never be seen again.

A toy boat will float in a bowl of water because the buoyancy (force) of the water is greater than the gravity (force) pulling it down. If you flood it, it will sink because you have increased its mass, and thus the force of gravity pulling it under becomes greater than its buoyancy. If you half flood it and give it a good push it will pop up at one end or the other.

The inept Chief tried frantically to hold the boat on Schnorkel depth, but she rose and fell like a see-saw. In despair I took over and said…”Just hold her at thirteen metres”. Within a few minutes the boat again lost her stability…she tilted up sharply and shot to the surface… I shouted, “Both diesels emergency ahead! Open all vents. All men to the bow.” The diesels knocked wildly, the boat rocked hard. For a few seconds…the sea held the boat in a crazy position, then she sank slowly, steadily…she swung into a forty degree down angle…At eighty metres I managed to level her off and establish her trim.
‘Iron Coffins’ by Herbert Werner    Cassell 1969


In this case, the forces of buoyancy and gravity were correct but they were not evenly balanced or ‘trimmed’. Submarines of both World Wars One and Two had main ballast tanks, fore and after tanks and a range of smaller tanks for trimming. Take the U-96 in Das Boot, for example. Why did it sink in the Straits of Gibraltar?

Breach in the diesel room, breach in the motor room…E-motor bilge making water fast…The bow heaviness jams me back against the forward wall of the control room. Are we descending faster than usual? “Boat out of control, can’t hold her,” whispers the Chief. No more buoyancy, only gravitational pull.
‘Das Boot’ Lothar Gunther Bucheim  1973 Piper Verlag GmbH Munich


Actually, Bucheim is incorrect here. The force of buoyancy was still present but the force of gravity was greater. So, why did it eventually rise?

“Respectfully report to Herr Kaleun – water taken aboard has been pumped into regulator cells – possible to expel it outboard with compressed air”…then I notice: no more water in the control room.”

Within the pressure hull of a submerged submarine air pressure (force per area) could change for a variety of reasons. 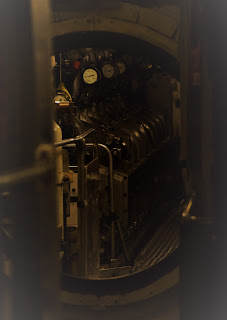 Posted by His Most Italian City at 8:26 PM